In October 2023, the Revista de la Facultad de Agronomía will celebrate 55 years since the publication of its first issue...and in the words of the first Dean of the Facultad de Agronomía, Dr. Hugo González Rincón, "we were inspired by the desire to bring to those interested some of the information produced in our Institution or collected and condensed from the extensive world literature". From that first issue to No. 1 of volume 40, currently in publication, the journal has had many achievements, among which it is worth mentioning:

In 1993, it was awarded by the Consejo Nacional de Investigaciones Científicas y Tecnológicas (CONICIT) with the "Tulio Arends" prize as the best National Scientific or Technological Journal. In 2008, it was ranked third in the results of the FONACIT-2007 merit evaluation in the AGRO area. In April 2008, the journal entered the Science Citation Index Expanded and Scopus, bibliometric indexes recognized worldwide, where it remains to date. In 2009, in the evaluation of merits FONACIT-2008, it was catalogued as a type A publication. In 2010 it ranked first in the results of the evaluation of merits FONACIT-2009 in the area of AGRO and second place within the journals of the Universidad del Zulia and in 2010 it was awarded the Order Jesús Enrique Lossada in its only class.

In 2004, the journal entered cyberspace with its own website and became bilingual in the printed version as of 2007. The sustained reduction of the university budget imposed by the national government, caused the suspension of the subsidy granted by the Consejo de Desarrollo Científico, Tecnológico y Humanístico for its printed publication and circulation in mid-2015, so the last printed issue was published in October of the same year. As of 2016, only the abstracts and titles of the scientific articles are published in a bilingual digital version in Spanish and English and in Portuguese.

In 2022, the image of the journal was refreshed and modernized, in addition to publishing the articles only in English and its archives are hosted in the portal of Scientific and Humanistic Journals of the Universidad del Zulia Revicyh-LUZ (https://produccioncientificaluz.org/index.php/agronomia).

The social crisis that afflicts Venezuelans has also affected the journal, affecting its normal operation. However, the mystique in the work and a high sense of belonging of the staff of the Revista de la Facultad de Agronomía, who faithful to the legacy of our illustrious rector Jesús Enrique Lossada have not been daunted, have allowed today our journal to reduce the average time of publication of scientific articles from 9 months in 2018 to 3 months in 2022.

The journal is indexed in more than ten prestigious bibliometric indexes.  Our journal entered the Scimago index in 2017 with an h-index of 3 and today its h-index is 8, likewise the h-index in the scientific search engine Scholar Google is 33 and only in mid-2017 the articles published in the journal began to be entered in this search engine.

The accumulated statistics of the journal for the year 2022 in CrossRef portal indicate that there had been just under 10,000 downloads of scientific articles.

In mid-2018 the journal was notified of its inclusion in Cabell's Whitelist listings. This is a list of more than 11,000 journals from 18 disciplines that are a guide for researchers and institutions to get the maximum impact from their research.

The future is an opportunity for the journal to continue growing and reaping success, improving its indexing and publishing current articles.

Finally, it is necessary to highlight the support of the authorities of the Faculty of Agronomy for the journal and especially the Editorial Committee, without their work it would be impossible to maintain the periodicity of our fifty-year old Revista de la Facultad de Agronomía.

This work is licensed under a Creative Commons Attribution-NonCommercial-ShareAlike 4.0 International License.

The journal is cataloged and/or indexed in: 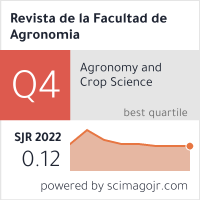